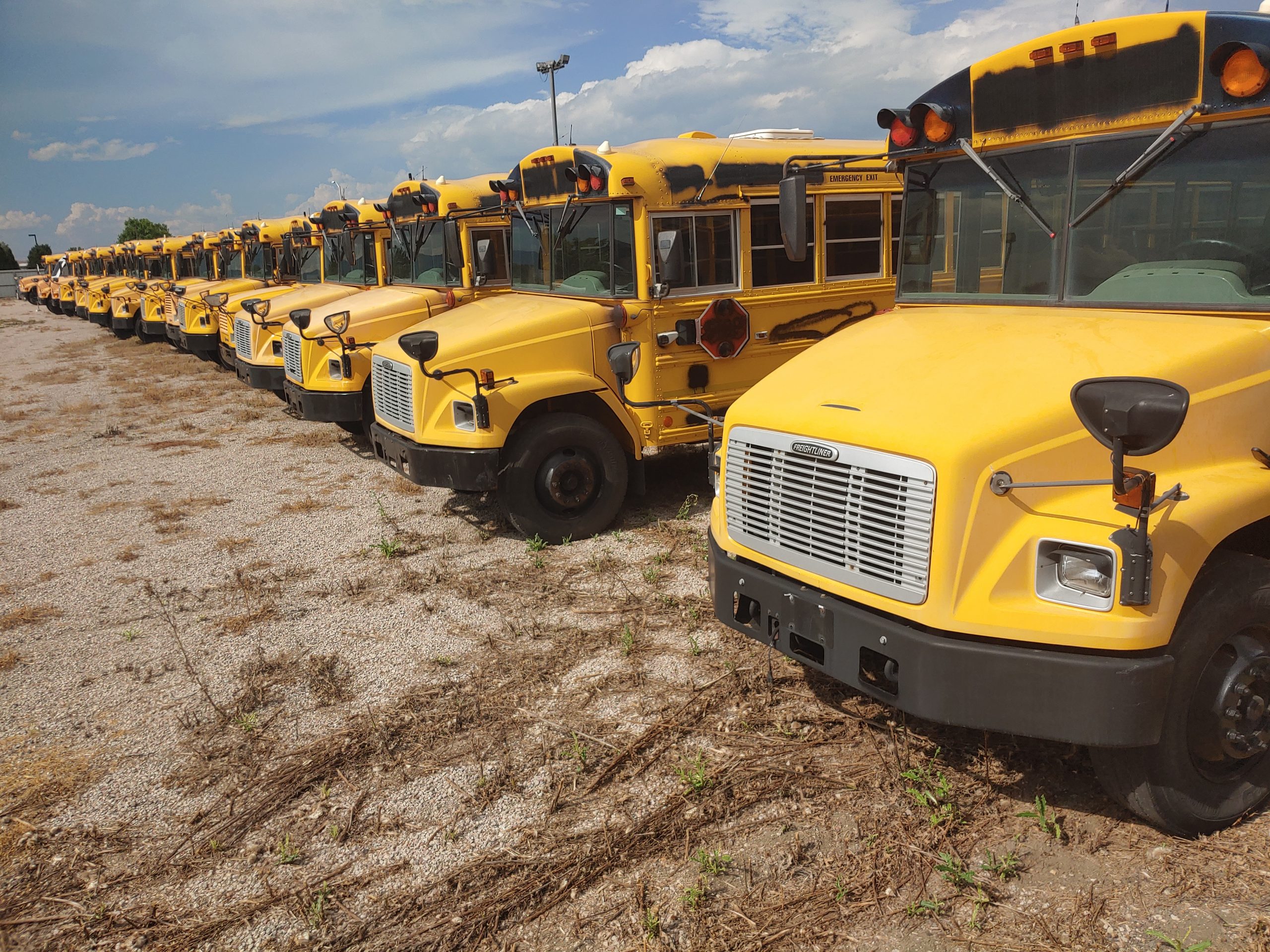 We recently received an anonymous tip about some School District 11 (D11) buses that were sold for scrap. Over the years, we’ve received complaints about the 2017 mil levy in D11 that increased business and property taxes for all who reside within the district . Businesses, especially, saw a big jump in their taxes to help fund D11 schools.

In early May, D11’s transportation department staff drove approximately 30 buses with full tanks of diesel fuel to a scrapyard. Prior to the trip to the scrapper, D11 staff took cans of black spray paint to the buses. They painted over identifying information. Additionally, they blacked-out headlights and drew pictures on the sides of the buses. Windows were broken. These destructive actions make it apparent that the functioning vehicles were being thrown away, and there was no intention for them to ever be driven again.

What do we know about the buses? Quite a bit after filing a Colorado Open Records Act (CORA) request for more information. We know that the scrapyard paid D11 $600-1100 per bus. The scrapyard didn’t throw all the buses away, though. We know that 18 of the vehicles ended up for sale at a local used car lot. They are listed for over $11,000 each. The mileage of the buses we tracked down are between 180,000-220,000 miles each and range in year from 1998-2002.

We’ve also done a little research into the engines. They are Cummins and Mercedes Benz diesel engines that can often go up to 400,000 miles if maintained properly.

As taxpayers, we have a big problem with this obvious vandalism and wastefulness.

We asked: Were the buses replaced with new buses or is there the intention to replace the scrapped buses with new ones in the future?

D11’s reply: “We purchase 5 new buses every year around September and October. This year we are purchasing 7 because of the new academic programs; the ridership and routes have increased.”

It makes a taxpayer wonder if the $330,000 would have made a nice down payment on 7 new buses.

We also asked for 2 years of repair records for the scrapyard buses. The maintenance records weren’t extensive. There were coolant leaks, heater repairs, radio repairs, squeaky brake repairs, and some seat repairs due to student graffiti damage. Nothing indicates the vehicles deserved a death sentence at the scrapyard.

There is a market for the buses, as evidenced by 18 of them ending up at a private used car lot. Private businesses saw the value of the vehicles. They saw an opportunity to profit. The public school district that collects tax dollars —also known as your money— did not see the value of the vehicles and threw them away. They can always just buy more buses —with our money.

This perfectly illustrates the point that private businesses understand the value of a dollar, but government entities don’t. It’s easy come, easy go with our tax dollars.

Do you live in COS School District 11? Are you as ticked off as we are that $330,000 of your tax dollars just went down the tubes? Do you want to know if this is a common practice with older D11 vehicles? Your elected school board members and public servants should hear from you. The School Board member email addresses listed below:

Also, consider contacting D11’s School Superintendent Michael Thomas and share your thoughts with him at Michael.Thomas@d11.org .