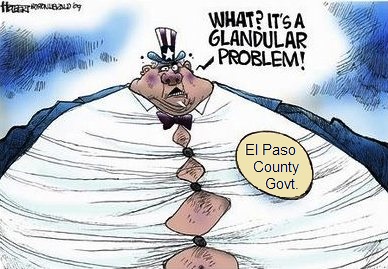 Ballots are hitting mailboxes right now. El Paso County Commissioners are asking voter permission to keep up to $20 million of the money we overpaid in taxes. We’re solidly against giving them even one more dime.

We wrote about the ballot issue here.

We wrote about the recent taxpayer funded county employee events to the zoo, Switchbacks soccer, and the Olympic Museum here.

This past week, the government wheels have started turning and El Paso County bureaucrats want to boost the salaries of county employees. No doubt some of the lower wage earners are underpaid, but not everyone is a low wage earner. At a time when we’re being asked to let them keep $20 million, and when they report they don’t have enough money to fix roads, why are they boosting salaries for those who are already being very well compensated?

How many employees work for El Paso County?

According to the El Paso County Public Information Officer here are the numbers for the past few years:

From 2018 to 2021, there has been an increase of 190 employees. That’s a 6.55% increase in 3 years. Does that mirror the population growth for El Paso County? No. Population in the county has risen only 3.5% since 2018. County government is growing at a rate almost twice that of the population! We need less government growth, not more.

Here’s a link to the El Paso County page for OpenTheBooks.com.  The county is now asking for a wage increase of 3.5% for all county employees, totaling an additional $7.4 million. Does this sound like a county that can’t afford to fix our roads?

Here is a look at the top 10 highest paid El Paso County employees for the year 2020:

Contact your County Commissioner and ask them why they hold our roads hostage, while they grow government at a faster rate than the population. Ask them why they have money for raises, but no money to fix the roads. It’s all about priorities, folks!