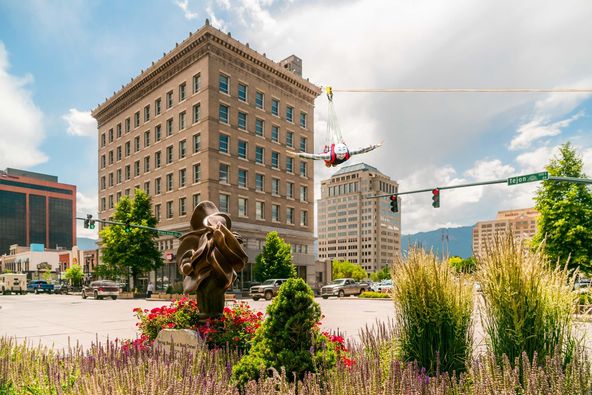 Mayor Suthers posted about a golf course the city was planning to build on top of Pikes Peak.

Downtown Colorado Springs posted that a company was coming in to provide zip lines for transportation. Both posts are below.

Realizing it was April Fools’ Day, we were quick to catch on to the fun and games. Still, people were falling for the pranks. We even had readers reach out to us about the projects. Sure, that’s funny, but given all the craziness that local government actually spends money on, why wouldn’t they?

The first was a post from the mayor’s office, touting a new golf course on Pikes Peak.

Next was a post from Downtown Colorado Springs about ziplines.

We hope you enjoyed our April 1 post as much as we enjoyed reading your comments. And yeah, we kinda wish it were for real, too.

Downtown Partnership is excited to announce the launch of Springs Urban Zipline (SUZ), a new form of transit that aims to ease traffic congestion and get people to their destination quickly and with a sense of adventure.

“With all our new apartments and hotels Downtown, we have thousands more people moving about our city center. PikeRide bike share, scooters and a new shuttle are fine, but we need a form of micromobility that exemplifies the rugged outdoor lifestyle we’re famous for here in Colorado Springs,” said Downtown Partnership President & CEO Susan Edmondson.

The first SUZ will traverse north from the historic Busy Corner at Pikes Peak Avenue and Tejon Street to the popular Bijou-Tejon intersection at Acacia Park. The zipline is scheduled to launch in late April and is a beta test for a series of ziplines throughout Downtown. “Next week we’ll introduce a new ordinance to City Council to require all Downtown buildings of 5 stories or more to integrate the new Springs Urban Zipline,” said Edmondson. “Within three years expect to see about a dozen ziplines throughout Downtown helping people connect to their destination.” Downtown Colorado Springs is not the first urban center to have a zipline, but ones like Fremont Street in Las Vegas and “the world’s longest urban zipline” in Dubai are purely for entertainment purposes. Edmondson says Colorado Springs will be the first city to integrate a network of urban ziplines with the primary use as a means of mobility, and recreation as a secondary benefit.

We are glad the officials and readers had a little fun with these posts, but with language like “micromobility,” and government’s pattern of spending vast sums of taxpayer money on projects that taxpayers don’t really want (we’re looking at you, bike lanes!), we forgive our readers for their confusion!