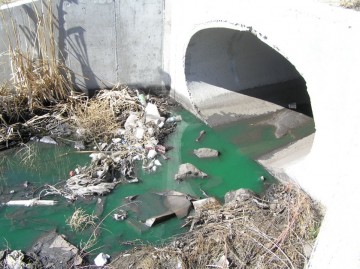 Where else but in America, do taxpayers pay for a federal agency to sue their city, pay attorney fees on both sides, and then pick up the tab for the imposed fines and future required projects?

Let’s look back at the history of the Colorado Springs Stormwater Fee to understand what taxpayers are now facing.

We are old enough to remember the 2017 ballot issue to tax Colorado Springs Utilities ratepayers, purportedly for stormwater projects. Remember that it was $5 per residential household, and even more on a per acre basis for commercial properties. It passed, although we put up a good fight against it.

Our own Laura Carno wrote a Gazette op-ed against it, and even debated the Mayor on it.  And we ran a catchy advertising campaign calling Mayor John Suthers a “taxaholic,” language we still stand by. And we predicted at the time that if it passed, the City would be able to increase the $5 fee whenever they wanted —without a vote of the ratepayers.

In November 2020, the City reached a settlement with the EPA that included a $2 million fine and a commitment to another $43 million in stormwater projects. As predicted, a hike in the fee was in the works.

During the Colorado Springs City Council Work Session, council members showed their support for Mayor John Suthers’ proposal for an increase in the fee.

The council members who spoke during the meeting favored option #2, which will eventually raise the fee to $8 per month (up from $5) for households, and $45 per acre per month (up from $30) for commercial property. Mayor Suthers said an increase now would prevent any increases in the next 15 years, which is the timeframe for the $43 million in stormwater projects. Councilman Don Knight disagreed, though, saying that raising it now will not guarantee it won’t increase again during that timeframe.

What is not being said about the EPA lawsuit? Much of the damage that led to the suit was caused by developers who weren’t following rules.

Taxpayers relied on the City to monitor the violators, but it didn’t happen. Yet, here we are, Colorado Springs Utilities ratepayers, facing another tax hike in the form of this fee.

An article from EPA.gov reports the “complaint generally alleged that the City of Colorado Springs violated its National Pollutant Discharge Elimination System (NPDES) permit for its municipal stormwater management program by failing to require the installation and maintenance of stormwater management structures at residential and commercial developments.  The complaint also alleged that the city failed to enforce requirements to prevent polluted stormwater from running off active construction sites”. For more facts about this suit and the ruling, read more here.

Among the violations: “The complaint also alleged that the City failed to require developers to install permanent stormwater management structures, such as extended detention basins, at large residential developments and failed to ensure these structures were properly built and maintained when they were installed. Finally, the complaint alleged that the City failed to enforce requirements that construction site operators implement appropriate measures to prevent polluted stormwater from running off active construction sites.”

So, to be clear, the developers didn’t do what they were supposed to do, the City government didn’t make them do it, and taxpayers and ratepayers pay the bill. That’s just wrong.

Please, contact the Colorado Springs City Council members regarding their upcoming vote to raise this fee. The council members up for re-election in April are:

Let Mayor Suthers and your Council Representatives know how you feel —politely, of course.

One thought on “Mayor Suthers Pitches Increase to Stormwater Fee”