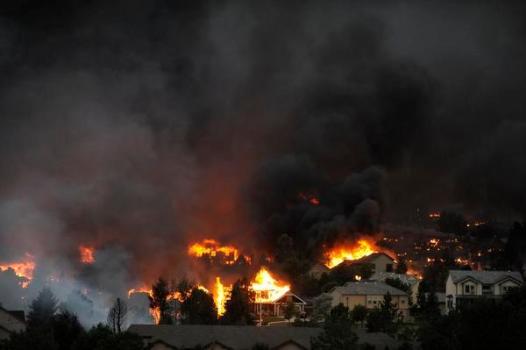 This Tuesday, May 25th the City Council will hear an objection to a rezoning application for the 2424 Garden of the Gods Rd property.  While this should be an easy decision for the council to deny because of safety concerns for the citizens of this area, unfortunately we have witnessed rezoning applications get approved time after time.

What is extremely concerning in this case is the City’s lack of planning for emergency evacuation. This will affect all residents on the west side of town in the Wildland Urban Interface (WUI), from the Broadmoor area north to Peregrine.

The Pikes Peak Area Council of Governments commissioned an evacuation study in 2010, two years before the Waldo Canyon Fire. This study clearly showed that there were going to be major issues with an evacuation, and it bore out when Waldo Canyon fire erupted.  The fact that the City had this information and did not make it public to the citizens of Colorado Springs is questionable.

The growth in the northwest part of our city has increased over 200% since this study was done.  The northwest area of the city has four major egress points, all of which became clogged during the Waldo Canyon Fire, with many citizens stating they thought they would die in their cars trying to flee the area.  Why then, would we allow up to an additional 420 apartments, at one of the most critical chokepoints for evacuation?  Additionally, none of the egress roads have been expanded in the 11 years since the study was conducted.  The City’s own traffic engineer has stated that both Woodmen Road and Garden of the Gods Road are considered congested streets.

Let’s look at the facts.  This is not a case of adding affordable housing to the market.  The northwest area of Colorado Springs has a surplus of market rate apartments, which is what is proposed for 2424 Garden of the Gods. This area is also home to one of the most robust herds of big horn sheep in the state.  The proposed zoning change would most definitely compromise their health and birthing areas. The proposed apartments will also block the view of the existing mountain backdrops, which is in violation of the city’s Hillside Overlay ordinance.  The developers have repeatedly refused to do a balloon study, which would accurately demonstrate the height of the proposed 3 story apartment buildings.

Adding high density homes in this wildland interface is a terrible decision that will negatively affect both our citizens and our wildlife.  We need to stand together as a community and object to this zoning change no matter what area of the city you live in.  Please email the City Council at allcouncil@coloradosprings.gov to let them know your objections and concerns.