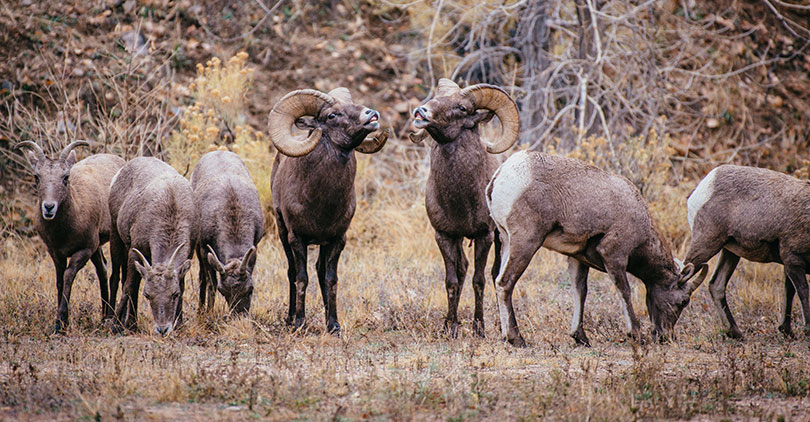 In Colorado Springs, a well-known wildlife corridor was completely disregarded by the CPW in an opinion given to that city’s planning and development department. The opinion helped clear the way for potential rezoning of 2424 Garden of the Gods Road, a 125-acre property that the Rampart Range herd of Rocky Mountain bighorn sheep moves to and through from areas of primary habitat to areas of seasonal grazing and safety. This property is located 1.5 miles from the main entrance of the Garden of the Gods, a city park and National Natural Landmark.

Click here for the rebuttal of the CPW opinion, that was presented to City Council by the Mountain Shadows Community Association, including many photos.

The developer is seeking rezoning in order to build high-density housing, the buildings of which would be only 1400 feet from a bighorn calving ground —a clear detriment to the herd. Currently, the property is developed with a single light-industrial / commercial-office complex. The CPW’s opinion is that the high-density development being proposed for 2424 Garden of the Gods Road would have little to no impact on the bighorn because the sheep do not use the property in any significant way. This opinion conflicts with scientific knowledge of the herd’s patterns of movement, eyewitness accounts from neighbors, and abundant photographic evidence. A wildlife professional at the Garden of the Gods uses a map in presentations showing that 2424 Garden of the Gods Road is an integral part of the wildlife corridor used by the Rampart Range bighorn herd.

Light purple is the expanded range of the bighorn after the fire, the red is the fire-affected area, the yellow is the bighorn area before the fire.

In an effort to understand why the CPW would deny the obvious, ignore the governor’s executive order and work against the best interests of bighorn sheep, I submitted a Colorado Open Records Act (CORA) request in January 2021 for CPW documents relating to 2424 Garden of the Gods Road.  The requested documents included email communications between the CPW and the Colorado Springs Planning and Development Department.  The CPW denied me the content of those documents.

The people of Colorado need the Governor to step in and direct the CPW to acknowledge the wildlife corridor that includes 2424 Garden of the Gods Road property, and ensure no further development takes place there.  The CPW is acting as a rogue government agency that answers to no one. The rezoning request was denied, but the developer has appealed.  The Rocky Mountain bighorn sheep remain a “species of greatest conservation need” at the state level and a “sensitive species” at the federal level (one step away from being added to the Federal Endangered Species List).  And the Rampart Range herd of Rocky Mountain bighorn sheep remain at risk of having a wildlife corridor they depend on severely compromised by further development.  Bighorn sheep from the westside of Colorado Springs are used to replenish disease-decimated herds throughout the state.  The United States Forest Service has attributed this herd’s health mainly to how limited encroachment on the land they use has been thus far.  If this herd dies off, then bighorn in the wild in Colorado will become something future generations can only read about.

CPW is undermining the Governor’s intent on wildlife corridors. Please let him know what you think.